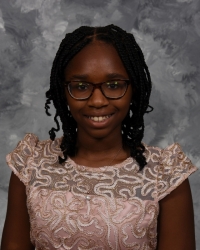 On Saturday, March 6, Seven Hills local Olivia Kude and her partner Nathan Thomas took second in the "Rock Hound" category while her younger brother Nelson Kude and his partner Shivam Mahajan also placed second in the "Don't Bug Me" category of the 2022 Science Olympiad competition held at Case Western Reserve University. The siblings were on the Birchwood team, coached by Linda Brown, Michelle Bogden, Lauren Miller, Sam Miller, and Rana Bottino have been practicing since October 2021. This team composed of fourth through sixth-grade students faced off with many local schools and this event and met with great results.

“Science Olympiad students went through a rigorous tryout process in October to be selected for Team 1 or Team 2 in November. Students have been working diligently since November each week after school for an hour on Wednesdays. Many teams also put in extra time over weekends testing, building, and studying. We are very proud of the hard work they put in and their ability to be flexible when changes needed to be made along the way!" Reported, the Birchwood coaches.

Abigail McNaughton is an alumni of Birchwood School of Hawken and excited to be reporting on the successes of current students.