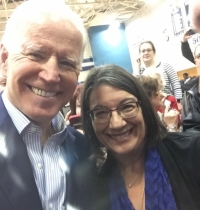 Over the course of the Covid-19 pandemic, lives have become upended as businesses, schools, and state and local governments have lost revenue for vital programs in our community. However, I am pleased to announce that as of March 11th, help is on the way thanks to the American Rescue Plan. I wanted to share the details of this legislation and what it means for Senate District 23.

First, the American rescue plan allocates over $5.6 billion to the state of Ohio. These necessary funds will assist in vaccinations, Covid-19 testing, education funding for schools to re-open, and the ability for the state to make up for lost revenue. The rescue plan will also provide over $200 million in essential capital improvement projects throughout the state. Additionally, the plan prevents more than 300,000 workers from losing benefits like unemployment compensation and pandemic unemployment compensation (PUA). This protection of worker benefits helps weather the economic storm due to the pandemic, and I commend the administration’s commitment to our social safety net.

I am also very proud to announce over $87 million in direct aid to cities/ municipalities in our district. The relief for our local governments will help with infrastructure, city services, revenue offsetting and more. The breakdowns of these funds from the federal government are as follows.

This funding does not include the $239 million in direct assistance to the Cuyahoga County government in which will aid multiple housing and infrastructure projects. This federal funding is an important first step in Ohio’s post-Covid road to recovery.

State Senator Nickie J. Antonio (D-Lakewood) is honored to be serving in the Ohio Senate, representing District 23, and in leadership as the Assistant Minority Leader. Antonio, who was elected to the Senate in 2018, previously spent eight years in the Ohio House of Representatives, where she served District 13 and was also a member of leadership. Antonio has served as a Lakewood City Councilmember, Executive Director of an outpatient drug and alcohol treatment program for women, Adjunct Professor and as a teacher for children with special needs.

Antonio serves as Highest Ranking Member on the Senate Health, Transportation, and Joint Medicaid Oversight Committees. She also serves on the Finance; Ways and Means; Workforce and Higher Education; Rules and Reference; and Joint Legislative Ethics Committees. Additionally, she is a member of the Ohio House Democratic Women's Caucus, previously as chair, and is the State Director for the National Women Legislators’ Lobby.

She has been a dedicated champion of workers’ rights, high-quality education, local governments, equal rights for women and the LGBT community, health care for all and fighting the opioid crisis.

Antonio is recognized as a leader who reaches across the aisle to get things done. As a result, she championed Ohio’s historic adoption open records law (S.B. 23/H.B. 61) and step therapy reform law (S.B. 265/H.B. 72). Last General Assembly, Antonio passed legislation to abolish the shackling of pregnant inmates (S.B. 18/H.B. 1) and to require pharmacist education for dispensing life-saving naloxone (S.B. 59/H.B. 341). During her tenure in the Ohio legislature, Antonio has introduced the Ohio Fairness Act, which would provide civil rights protections for members of the LGBTQ community. She continues to work to remedy and end Ohio’s use of the death penalty, as well as on an array of other bills focused on improving the lives of all Ohioans. Antonio continues to be an established expert in health policy in the General Assembly.

The first in her family to graduate from college, she holds both an MPA and a B.S. Ed. from Cleveland State University, and she was named a CSU Distinguished Alumni in 2013. She is also an alumnus and Bohnett Fellow of the Kennedy School Harvard Leadership Program (2011) and has been the recipient of numerous awards as legislator of the year from various organizations during her tenure.

Her daughters, Ariel and Stacey, have made Antonio and her wife, Jean Kosmac, very proud as the girls engage in their adult life journeys.