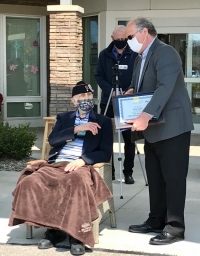 Walter was raised in Cleveland with his three brothers and four sisters. He graduated from Lincoln High School and then served in the U.S. Army from 1942 to 1946. During W.W. II, he was assigned to the 33rd Infantry Division as a tech sergeant and photo interpreter in the Southwest Pacific. After returning to the states, he married Mary Koteles in 1952. Three years later, the couple moved from Cleveland to Parma where they bought a new bungalow on North Avenue to raise their two sons.

A steelworker, Walter was employed 40-plus years working various jobs for U.S. Steel, Cuyahoga Works and Newburgh/Cuyahoga Heights before retiring in 1983. He and Mary celebrated 60 years of marriage before her death in 2012. He stayed in their North Avenue bungalow until 2019 before moving to Vista Springs. He is a member of St. Leo the Great Parish in Cleveland and the American Legion in Parma.