So What's Up With Parma And Flamingos? 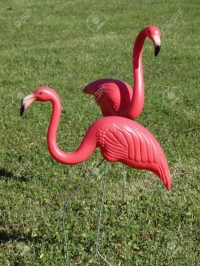 Often I’m asked what’s this obsession Parma has with flamingos? You see them everywhere in Parma, plastic lawn ornaments and in logos for businesses and nonprofits. So here’s the Parma flamingo story.

Don Featherstone was the artist who created the pink plastic flamingo in 1958 for Union Products, when the color pink was the popular color. He had never seen an actual flamingo and based his sculpture molds from photos in a National Geographic magazine. Parma was a fast growing middle class community during this time period. From 1950 to 1960 the population increased from 28,897 to 82,845. New homes with manicured lawns popped up all over Parma. The pink color certainly is appealing, and reminds us of summer. The pink lawn ornaments add a splash of color to the lawn. Don Featherstone, a fun lovin’ character, died at the age of 79 in 2015.

In 1961 WJW TV-8 hired an announcer and movie program host, Ernie Anderson. From 1963 to 1966 Ernie Anderson was the host of Shock Theater, a Friday night late-night program that featured horror movies. Anderson created a character called Ghoulardi, a hipster or beatnik type character, in a long lab coat, with a fake beard and mustache and weird wigs. During breaks in the movie he’d comment with phrases like, “Hey group!”, “Cool it!”, “Turn blue”, “ova-dey”. And “Stay sick, knif” (fink backwards). At the show’s most popular period Shock Theater had captured 70 percent of the late-night audience, thanks to Ghoulardi’s antics. Ghoulardi often made targets of local personalities, such as then Cleveland Mayor Ralph Locher, and news analyst Dorothy Fuldheim, whom he called “Dorothy Baby”, as well as others. As a teen during this period I can attest to his popularity. Many families gathered around those small screen TV’s with pizza for the start of a fun weekend.

Ghoulardi also targeted Parma, “Par-ma?!” or “Amrap”, which is Parma spelled backwards, during his program.He unmercifully jeered Parma for being conservative, ethnic and working-class. He made fun of white socks, polka music, and lawns with pink flamingos and chrome balls, or lawn globes. He also aired skits titled “Parma Place” with ethnic characters modeling after Peyton Place, a then prime time soap opera, during breaks in the movie. “Parma Place” was well received by the public, not the mayor of Parma and other Parma politicians. (Some of these skits are still able to be seen on YouTube.) Eventually Ghoulardi was forced to stop “Parma Place”.  He pushed the boundaries of live TV and was reined in. His antics included riding a motorcycle through the program director’s office. , and having a card printed with the program director’s home phone number, televised, asking the audience to voice their complaints. Anderson left Cleveland in 1966 for L.A. Following Shock Theater came The Hoolihan and Big Chuck Show. You can find a Ghoulardi fan club on Facebook.

When I moved to Parma in the early 1970’s, I had a Welcome to Parma Party. Complete with white socks, pink flamingos, bowling shirts, and kielbasa and kraut. It was a huge success. The popularity of pink flamingos is just like any other fad, it grows and fades. It’s currently on the rise. You see flamingo designs in all sorts of products. Parma is now linked forever with the pink flamingo. So that's the story. To all my fellow Parma Peeps, embrace the flamingo. Thanks Ernie for the memories.