COVID-19 Survivor Advises: 'Do Yourself A Favor, Wear The Mask' 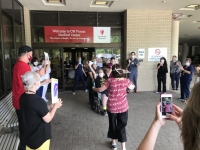 Jerry Gustin's wife rushes to hug him after his discharge from UH Parma Medical Center following a 57-day stay recovering from COVID-19. More than 60 caregivers cheered as he exited the building for a tearful reunion with his family.

A COVID-19 survivor who spent 57 days in the hospital had a strong lesson before his recent discharge from University Hospitals Parma Medical Center: "Wear the mask and stay six feet apart. I'm telling you, this disease can kill you." Jerry Gustin, 74, of Parma left UH Parma Medical Center on May 27 following intensive rehabilitation in UH Parma Medical Center's Acute Rehabilation Unit. He underwent at least three hours of occupational and physical therapy every day to regain his strength to walk and care for himself again.  The nurses, therapists and physicians became a second family to him, as no visitors are currently allowed in hospitals due to the pandemic. Jerry began every morning with a call to his wife, Linda, and received extensive support from his four children and eight grandchildren, who called and sent signs to motivate him.

Gustin arrived in the Emergency Department by ambulance on April 1, feverish, breathless and unable to walk. "I felt like my chest was closing in on me," he said. He was admitted to a special COVID unit and later transferred to the Intensive Care Unit, where he spent 23 days. While he was never intubated, Gustin needed a good deal of oxygen and slowly began to regain strength.

"I looked up and I started praying to God, please help me through this," recalled Gustin. He had a stint at Regency Hospital before returning, now COVID-negative, to the Acute Rehabilitation Unit for intensive therapy. Gustin made mental lists of what he needed to accomplish to move forward each day: walk again, climb stairs, shower.

Allison Evans, Program Director for the Acute Rehabilitation Unit, said Gustin initially needed the maximum amount of assistance for dressing, bathing, walking and other activities of daily living. But his positive attitude, as well as the motivation he received from his family by phone and his second family of caregivers in the unit, helped him through this ordeal.

"I conquered everything that was expected of me," said Gustin, sporting a T-shirt with gold lettering proclaiming 2020 Pandemic Survivor - We Battled. I Won. "I totally respect the people who got me through this, and I really want these people that are going out and having fun to know: Please do yourself a favor - wear the mask and stay six feet apart.

"We can all survive this together."