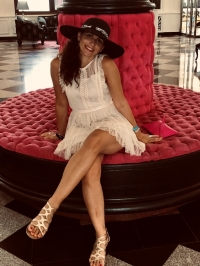 Maria-Elena Hill is enrolled in a clinical trial that can help detect inherited genetic mutations that can put her and other family members at risk of developing other cancers.

At 40, Maria-Elena Hill was crushing it – working out and walking daily, eating healthy and avoiding fast food, living a sweet life. But on a dream trip to Greece, the occasional monthly symptoms that arose during her menstrual periods grew ominously unusual. Bloated and agonized by shooting pains in her pelvis, she had trouble buttoning her size 4 pants.

“I was in great physical shape, but it’s easy to make excuses when you don’t have any of the warning signs for cancer in your life,” said the Toronto native, who now lives in North Royalton. “When my doctor told me I had cancer, I just kind of shut down.”

Fortunately, she was referred to gynecologic oncologist John Nakayama, MD, at University Hospitals. Her diagnosis of stage 1 endometrial cancer led not only to surgery to remove the cancer but a clinical trial that discovered an underlying condition that can predispose her to other types of cancer.

UH is the second site in Ohio to enroll women with endometrial cancer in a clinical trial to identify inherited genetic mutations that may predispose them, and possibly other family members, to a higher risk of many types of cancer. Ohio Prevention and Treatment of Endometrial Cancer (OPTEC), which began at The Ohio State University Comprehensive Cancer Center – James Cancer Hospital and Solove Research Institute (OSUCCC – James), is looking primarily for undiagnosed cases of Lynch syndrome, a hereditary condition that greatly increases risk for colorectal cancer.

To be eligible for the OPTEC study, individuals must be 18 or older with a case of endometrial cancer diagnosed since Oct. 1, 2017. Candidates must also have undergone a hysterectomy or surgery at a participating medical facility like UH.

“This disease is a beast; it doesn’t distinguish between age, race or ethnicity,” says Maria-Elena, whose brother and mother in Toronto are going for testing.

A participant must agree to genetic testing of a blood sample and some of the uterine cancer removed during her hysterectomy. Tumor tissue and blood will be thoroughly checked for evidence of Lynch syndrome, and other less common genetic abnormalities that could increase the risk of cancer.  Results of these tests will be shared with and explained to participants. They may also consent to have a sample of their tumor tissue provided to the OSUCCC – James for research purposes.

“UH Cleveland Medical Center was recruited to participate in the OPTEC study based upon our excellent track record of research accomplishments and the large number of patients with endometrial cancer that we treat,” said Steven Waggoner, MD, Chief of Gynecologic Oncology at UH Seidman Cancer Center. “Patients cared for at UH reflect the racial and socioeconomic diversity of Northeast Ohio. It is very important that studies on genetic factors associated with a higher risk of developing cancer reflect these diverse populations.”

UH’s Center for Human Genetics will provide free genetic counseling for patients and their adult blood relatives if a participant is found to have a genetic abnormality that could raise her or her family member’s risk of developing cancer. This information will become part of their comprehensive medical record.

“We may well advance the treatment of endometrial cancer from this study,” said Jan Maxson, CNP, at UH.

Maria-Elena feels lucky to have learned that she carries Lynch syndrome. While already vigilant about screenings, she and her family members have a heightened awareness about cancer risk now.

“UH is awesome - I’m beyond thankful for them,” said Maria-Elena, who is in remission. “I’m very proactive, and now that UH has helped me find out I have this, I’m doing all my tests.”