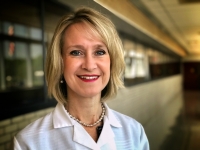 Kimberly Togliatti-Trickett, MD, a longtime physician leader and care provider at University Hospitals Parma Medical Center, has been promoted to the position of Chief Medical Officer, effective June 1. Dr. Togliatti-Trickett had been serving as Associate Chief Medical Officer, working with Chief Medical Officer Christopher Loyke, DO. Dr. Loyke departed to become the Assistant Dean of Clinical Medicine at the DeBusk College of Osteopathic Medicine at Lincoln Memorial University in Harrogate, Tenn., where he will oversee the education of third-and fourth-year primary care medical students and also will care for underserved patients in Appalachia.

As UH Parma’s Chief Medical Officer, Dr. Togliatti-Trickett will be part of the Executive Leadership Team, serving as a liaison between the system’s administration and the medical staff. Her responsibilities also include ensuring high-quality patient safety and compliance and serving as a strategic leader in the planning process.

Dr. Togliatti-Trickett has been an instrumental member of UH Parma Medical Center’s medical staff since 2001. In addition to being Associate Chief Medical Officer at UH Parma since 2014, she has been a Physician Advisor and spent two years as Chair of the Department of Medicine. Board-certified in physical medicine and rehabilitation, as well as internal medicine, she also has been serving as Co-Director of the Acute Rehabilitation Unit since 2002.

She obtained her medical degree from University of Cincinnati’s College of Medicine. She completed residency training in internal medicine at MetroHealth Medical Center, and in physical medicine and rehabilitation jointly at MetroHealth, Case Western Reserve University and the Cleveland Clinic Foundation.

A resident of Independence, Dr. Togliatti-Trickett has four children. Her husband is a retired Command Sergeant Major in the U.S. Army.