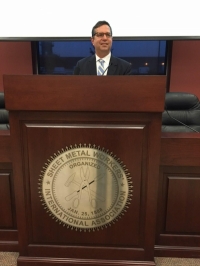 In his seventh State of the City address Monday evening, Mayor Tim DeGeeter touted Parma as a great location for people looking for a safe community and a good quality of life. During his speech at the Sheet Metal Workers Local #33, DeGeeter also highlighted Parma as a city on the rebound and highlighted rising housing values. “Over the past three years, our housing values have increased by 25 percent,” he said. “In 2017 alone, those values jumped 6.6 percent. The median sales price is now nearly $107,000 – up from a low of $85,000 in 2015.”

Beyond the housing market, DeGeeter also focused on Parma’s record as one of the safest cities its size, citing recent rankings from security companies.  SafeHome.org ranked Parma as the second safest city in the state and alarms.org listed the community among the Top 50 safest municipalities in the country. “Not only are these rankings a testament to the hard work of our police officers, but they also speak to our residents who do their part by reporting crimes and suspicious activities to help protect their neighborhoods,” he said.

DeGeeter also promoted Parma’s diverse neighborhoods – from Polish and Ukrainian villages to the West Creek-Quarry District.  And he pointed out the impact of the Shoppes at Parma’s more than $90 million redevelopment. “The tens of millions of dollars spent in this transformation also has spurred development in the area of Ridge Road, Day Drive, and West Ridgewood,” he said.  “And we’re seeking to seize upon this opportunity. We’re creating a Town Center Strategic Master plan – with help from the Cuyahoga County Planning Commission – to harness and incorporate all that is offered in this vital part of our community.”

DeGeeter also provided background on the city’s streets program to rebuild and repair Parma’s aging infrastructure. He described the financial challenges in tackling more than 500 lane miles of roads in the city – particularly in light of the loss of $27.5 million in state funding since 2009. “Yet, we’re making strides by taking a fiscally-disciplined and systematic approach, and leveraging hundreds of thousands of dollars each year in state and federal dollars through low-interest loans and grants,” he said.  “Last year, Parma invested more than $6 million in major improvement to 29 streets.” DeGeeter also cited additional private-sector investment as a sign of Parma’s strengthening economy, including the long-awaited PITT OHIO project in front of the former GM Powertrain building. When finished, the company, according to DeGeeter, expects to initially employ 180 workers with a payroll of about $7 million. But, he said, PITT OHIO could employ a total of 240 people at the proposed trucking terminal.

DeGeeter finished the address by focusing on two different residents. One, Ken Ehlert, who has spent a lifetime serving the public good in so many ways, and another, Christine Vodicka, who despite having enormously challenging health issues, has still managed to operate a successful tutoring business and learning center, while chasing dozens of dreams and being an absolute inspiration to everyone she meets.

Communications Director for the City of Parma