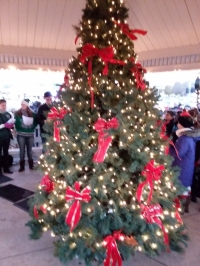 The Parma Heights Christmas tree was officially lighted for the public on Sunday, November 26.

The city officially kicked off the 2017 Holiday season on Sunday, November 26 by lighting the official Parma Heights Christmas tree. Festivities began at 5 p.m. in the city gazebo in the Greebrier Commons complex. Mayor Michael P. Byrne hosted the event, which drew more than 100 residents and families to the heart of Parma Heights. Fourth grade music students from Parma Park Elementary School, under the direction of Pamela Owens, peformed two musical selections. Students from Holy Name and Padua Franciscan High Schools led attendees in a series of three holiday carols: Silent Night, Jingle Bells, and Angels We Have Heard on High. That was followed by a visit from Santa Claus himself, who arrived in a Parma Heights police car with lights flashing.

All in attendance enjoyed complimentary hot chocolate provided by the Vineyard Cleveland Church on York Road in Parma Heights. After that, it was time for the children of Parma Heights to share with Santa what they would like to receive for Christmas. Each child received a holiday goodie bag to take home after the event.