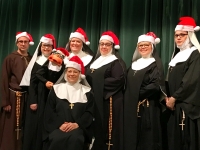 Cast members of the Cassidy Theatre production of Nuncrackers:  The Nunsense Musical, with Direction/Musical Direction by Michael Caraffi.

The Cassidy Theatre will present Nuncrackers: The Nunsense Musical, December 1-17, 2017, with book, music and lyrics by Dan Goggin. The production is both directed and musically directed by Michael Caraffi.  Choreography is by Melanie Leibold.

In the production, the Reverend Mother has built a Public-access television studio in the basement of the convent in order to film a holiday television special. The audience gets a behind-the-scenes look as everyone’s favorite nuns, Father Virgil, and four of Mount Saint Helen’s most talented students as they prepare for the show. The show features all new songs including Twelve Days Prior to Christmas, Santa Ain’t Comin’ to Our House, and We Three Kings of Orient Are Us. The show culminates in a wild spoof of Tchaikovsky’s classic ballet.

The Cassidy Theatre was founded in 1974 with the mission to enrich the multicultural life of the Greater Cleveland area by providing a diverse theatre arts program that entertains, informs and educates. Now in its 41st season, Cassidy is proud to remain steadfast in this mission and continue the tradition of excellence in bringing quality productions, performances and special events to the Northeast Ohio community.

From classic dramas and slapstick comedies to modern Broadway musicals and whimsical family fare, The Cassidy Theatre offers exceptional entertainment and artistic opportunities to the diverse and multigenerational audiences in the area.

"The mission of Cassidy Theatre is to enrich the multicultural life of the Greater Cleveland area by providing a diverse theatre arts program that entertains, informs and educates."

The Cassidy Theatre is sponsored in part by the residents of Cuyahoga County through a grant from Cuyahoga Arts and Culture.