Making A Difference One Person At A Time 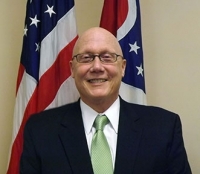 Michael P. Byrne is the Mayor of Parma Heights.

Over the recent summer, as Mayor I had the opportunity to have conversations with a large number of residents. In my role, I feel it is important to be personally connected to the people I represent.  We live in a close-knit community where that connectivity is readily apparent.  For me, it often happens one person at a time.

Whether it was during the recent Kids in the Commons event in August, at the Ward 3 Garage Sale, while meeting with the families of our veterans during the annual Ohio Flags of Honor memorial, or the Korean War veterans event in September, one common question I received from residents concerns the Cornerstone property.

The question?  “What is going on with that large vacant parcel of land near the intersection of Pearl Road and West 130th Street.”

Those residents who have lived here for a longer period of time may remember this parcel as the location of various commercial enterprises, including Tops Discount Store, Barney’s Wholesale Foods, Tops Grocery Store, USA Skates, Honey Hut Ice Cream and Meineke Muffler.

This property was purchased by a private owner, who in partnership with a commercial land developer approached the former city administration with the plans for a mixed-use retail and residential development. The owner had legal issues which resulted in the property coming under the control of the Common Pleas Court.

A subsequent developer acquired the property through a court-ordered auction. This new developer had its own legal issues (unrelated to the Parma Heights development) and the property was foreclosed  upon by Wells Fargo Bank. As a result of the foreclosure, Wells Fargo, of Charlotte, North Carolina, became the new owner of this property, and remains the current owner.

Litigation about the various parties’ positions regarding the special assessment, mechanics liens, and debt owed to lenders is on-going. The matter is currently pending in the Court of Appeals. This litigation has made it difficult to attract developers to the site.

Over the years, we have realized that many people think that the City of Parma Heights owns or can develop this property. This is not the case, as Wells Fargo Bank is in full control of the disposition of the land. While many people have suggested creative ways to develop the land, such as developing it into a public park, only Wells Fargo can make that decision. I agree with the many residents who want this property to be sold to a developer with a viable development concept.

We continually and aggressively require property maintenance, provide assistance in marketing the property to potential developers, and forward potential leads to Wells Fargo for its consideration. We have had encouraging and positive discussions with several interested parties over the years, and have worked diligently to facilitate new development.

Parma Heights is committed to continuing to do everything we can to work with Wells Fargo to secure an appropriate buyer for this property.

And, as Mayor, I am committed to staying connected with our residents. One person at a time.

Michael P. Byrne is the Mayor of Parma Heights.