The "Undesirables" Are Back! 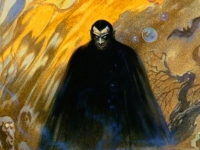 The “Undesirables” are Back!

1. Creep\ “krep\ vi crept> 1a: to go timidly or cautiously so as to escape notice. b: an unpleasant or obnoxious person.

That's right, the “Creeps” are back and just in time for the Halloween season. These are the ones who crawl out from under rocks to steel and rob Parma citizens of their possessions. Usually, they just ransack automobiles, at night, that are left unlocked. Others will just take the whole automobile. Possessions left on porches will also be snatched away for a few bucks it may bring. When spotted, or a light is shined on them, they scatter away like roaches back into the nearby woods from where they crept out of. Last month these creepers have been sighted in the area of Metro Hospital on Snow Road and on Woolman Court that runs next to the hospital. Not only were they ransacking cars in parking lots on Woolman Court, but there have also been reports that they were peering into windows of sleeping residents late at night. One Parma resident said, when looking out their window after being woken up by a light being shined in his bedroom window, they saw these creeps disappear into the woods located behind Metro Hospital. These woods stretch all the way to West 130th Street and are a perfect cover for these creeps to travel without being spotted by the police.

It really is true that strange ones come out late at night when the majority of us are asleep. Six years ago I observed out my bedroom window, at 3o’clock in the morning, a very strange looking character going through unlocked cars in the parking lot. This guy was bald on top with dark bushy hair sticking out on the sides. He looked around 40 years of age and was wearing a long black trench coat that went down to his white sneakers. I automatically assumed that the long coat was full of pockets for carrying stolen items and the high top tennis shoes were for making quick escapes. He looked like a cartoon character out of a Sunday newspaper. I wondered to myself, dressed as peculiarly as he was, how was this guy to walk the streets at night and avoid being seen by authorities? I have been living in the Parma area for over twenty one years and have never come across anybody that looked that bizarre. Sure enough, when I called out to him, “Can I help YOU”, he spun around in a squatting position before sprinting off into the nearby woods.

According to police, a “Neighborhood Watch” is one of the best ways to deter crime away from your neighborhood. It's a non confrontational way to let strangers/creepers know that they are being watched. When you see a stranger in your neighborhood, just turn on the light, make some noise, and say “Hello”!. Let them know that you see them. Most likely they will move on to a neighborhood where no one is watching. If the person seems questionable, call the police to have them checked out.

I am a Parma resident who has lived in the city for over 24 Years. I'm also a non-profit video producer who produces national, and international documentaries for public access, private and goverment networks .