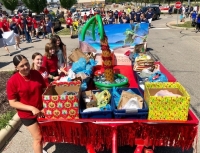 The City of Parma will launch its month-long Christmas in July Food Drive at its Independence Day Parade, starting at 10 a.m., Monday, July 4.

Padua High School student volunteers and city workers walking next to the Christmas in July float will collect donations along the parade route, which will travel south on Ridge Road from Snow Road to West Ridgewood Drive by The Shoppes at Parma. Spectators can bring their donations to the parade. When they see the Christmas in July float, they should wave down volunteers, who will then walk over to them to take their bagged items. The donations will help fill the Parma Hunger Center’s food pantry.

“Most people make food donations during the holidays, but it’s not on their minds during the summer months,” said City of Parma Communications Director Carolyn Kovach, who organizes the annual food drive. “Independence Day is a summer holiday when we can remind residents not to forget about the Parma Hunger Center and residents who need support, especially for those on tight budgets or fixed incomes who are coping with rising grocery bills.”

The Christmas in July Food Drive began several years ago under the direction of the City of Parma Mayor’s Office.

“Last year, our blue plastic bins were filled to their brims with donations during the parade and at the collection sites. Residents were generous, and we hope to see that generosity again this year,” Mayor Tim DeGeeter said. “We appreciate the hard work of the Parma Hunger Center’s volunteers and the important role they play in helping residents. This is our way to support the Center.”

In addition to in-person donations, online donations are a convenient option. Residents can go to the Parma Hunger Center website at www.plcparma.org/donate.html to donate. After clicking on the donation button, the donor should select the Parma Hunger Center food program to donate and indicate it contribution is for the Christmas in July campaign.

For questions about the Christmas in July Food Drive, email ckovach@cityofparma-oh.gov with the subject line Food Drive.