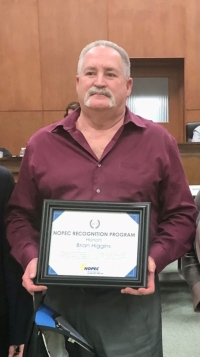 Safety Director Thomas Weinreich retired at the end of May after 36 years of serving Parma residents. Weinreich’s career spans five mayors and four leadership roles, with the most recent as safety director overseeing police, fire, dispatch, animal control and other departments. He has a law degree from The University of Akron’s School of Law and served as a Parma assistant city prosecutor for 12 years. He also was city tax commissioner for eight years, and human resources and purchasing director for seven years. “The safety director maintains a stressful job, requiring strong communication, administrative and public policy skills, as well as patience, flexibility and tenacity. Tom embodies all these strengths and more,” Mayor Tim DeGeeter said. “He played a key role in keeping Parma safe and helping our first responders deal with the heroine epidemic, pandemic crisis, fires, weather events and other emergencies our city and other cities face.”

Weinreich has served his community outside of work, too. He has held leadership positions in various professional and civic organizations, including the Cuyahoga County Juvenile Court Diversion Program, Ohio Association of Public Safety Directors, Northeast Ohio Municipal Prosecutors’ Association, Parma Area Chamber of Commerce and the former Parma Jaycees and Proud of Parma, among others. An active parish member, he is the finance council chairman of St. Charles Borromeo Church on Ridge Road.

Weinreich grew up in Parma, graduated from Parma Senior High School and lives in Parma with his wife Leanne. Their son, Zach, is a firefighter/paramedic full time for the City of Rocky River and part time for the City of Broadview Heights. “I am grateful for the opportunity to have spent my career serving the community I love and call home,” Weinreich said. “During that time, I have been blessed to work with and for many very dedicated men and women in our safety forces and throughout the city.”

Additionally, Service Director Brian Higgins retired in May after serving the city more than 18 years. As service director, Higgins oversaw the city’s infrastructure, yard waste and rubbish disposal, recreational parks and facilities, print and sign shops and the service garage. Whether it was heavy snow or heavy rain, it was Higgins and his team that worked long hours in fowl weather clearing snow from streets or working closely with Northeast Ohio Regional Sewer District to manage storm water. He also worked closely with city engineers, Cuyahoga County Public Works and the Ohio Department of Transportation to fix and repave streets. In fact, there are enough lane and sidewalk miles to travel one-way from Parma to North Carolina, making road and walkway maintenance in Ohio’s seventh largest city a never-ending job. “The service director position is tough in a big city like Parma. It requires taking calls all hours of the day and on weekends or holidays. When there was a snowstorm or storm-water issue, Brian was fielding calls from me and council members,” DeGeeter said.

Before former Mayor Dean DePiero hired him, Higgins was the service director for the City of Brook Park. He also was a union electrician for the International Brotherhood of Electrical Workers Local 38. To recognize his service and without Higgins’ knowledge, city council voted on May 16 to name the Parma service garage on Chevrolet Boulevard the Brian Higgins Parma Service Center.“We kept the building name a surprise because Brian didn’t want a party or anyone making a fuss about his retirement,” DeGeeter said. “We didn’t listen to him because he deserves this recognition.” The mayor called Higgins a family man who often talks about his wife, Karen, and their three adult children and grandchildren. Higgins will now have more time to spend with his family.