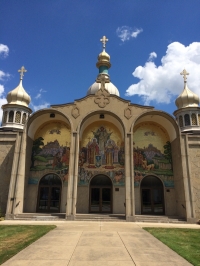 This month’s column is a continuation in my series about “Parma’s Places of Worship.”  As a Catholic, I have always been intrigued by Eastern Orthodoxy and hopeful that one day the two biggest divisions within Christianity will be united.  Therefore, I recently traveled to 5913 State Road to meet with Father John Nakonachny, Pastor of St. Vladimir’s Ukrainian Orthodox Cathedral, to find out more about the parish and faith.

What always strikes me about St. Vladimir’s is how welcome I feel whenever I visit St. Vladimir’s. In fact, Fr. John and I met for about three hours – a testament to how easy he is to talk to. It is obvious why he makes such a great Pastor. He grew up in Pennsylvania, began his spiritual ministry in Winnipeg, Manitoba, then Maplewood, New Jersey before he and his bride came here to Parma in 1987 to serve. “Winnipeg had quite a large Ukrainian population. I never dreamed I would find another place like it, which is why I was so surprised and pleased when we moved to Parma,” Fr. John explained. “In fact, in recent years, our Saturday cultural school student population is growing so fast, due to so many new arrivals, that we are running out of space,” he added. Incidentally, the Parish is thankful to Good Shepherd United Methodist Church across the street for allowing them to use space for their classes.  St. Vladimir’s and the surrounding neighborhoods are truly a bastion of Ukrainian people and culture, thus this area of Parma has been aptly named Ukrainian Village.

Father explained that St. Vladimir’s was founded in 1924 with a church being built in Tremont soon thereafter. Like many other churches, following World War II, as population shifted to the suburbs, the parish purchased ten acres of property in Parma. Further, in 1959 the parish purchased the old Parma City Hall for $11, which, according to a church document, was “moved and renovated for a chapel.” Finally, in 1967, the current church was consecrated as a place of worship.

St. Vladimir’s property holds one of my favorite monuments in the region. Dedicated in 1993, it is a beautiful monument honoring the over 7 million victims of the Artificial Famine in Ukraine in 1932-1933. The Holodmor (hunger-extermination) was the work of Soviet dictator Joseph Stalin, whose cruel policies directly caused what is oft described as one of the 20th century’s worst attempted genocides.

The Cathedral itself is an architectural wonder, from its beautiful domes to the multitude of wondrous icons. “You will not see statues in Orthodox churches.  Instead, icons have been used throughout history as a teaching tool – as a living Bible,” Fr. John shared. “Years ago many could not afford books and could not read or write, therefore the iconography in the church brought the Biblical stories to life for the congregation,” he added.

The parish also is home to the very spacious Grand Hall, which can be rented for events. Located just east of the Cathedral at 3425 Marioncliff Drive, the Hall offers elegant catering. Call 440-885-0468 for details.

If you are like me, one of the reasons I love Parma is for our pierogies. No matter how you spell it or prepare them, they are scrumptious comfort food. In fact, I think we should claim Parma as the Pierogie Capital of the World. If you have not tried St. Vladimir’s pierogies, you have to. To place an order, call 440-886-3223 between 10:00 a.m. and 2:00 p.m. weekdays or e-mail them at potatopyrohy@yahoo.com.

Every summer, the parish of St. Vladimir hosts a Ukrainian Festival, which includes many Ukrainian delicacies and beverages, Cathedral tours, as well as cultural performances and sales. The Parish is also co-host of the annual Ukrainian Village parade, art walk, and festival toward the end of August. To find out more about these and other events in Ukrainian Village, visit www.facebook.com/UkrainianVillage.

As I mentioned in last month's column, there are over 250 million Orthodox Christians worldwide, with about 1.2 million living in the United States. Although Orthodoxy is quite ethnically diverse, including Ukrainian, Russian, Greek, Romanian, Serbian and others, all of these ethnic jurisdictions belong to one Eastern Orthodox Church and are unified theologically and morally. All are invited to their services.

To find out more about St. Vladimir’s, visit their website at www.stvladimirs.org. A special thank you to Fr. John and the parish of St. Vladimir’s for inviting me into your beautiful place of worship.